There Were Three in the Bed...

I know that you - like me - adore your children.

But how do you feel about... 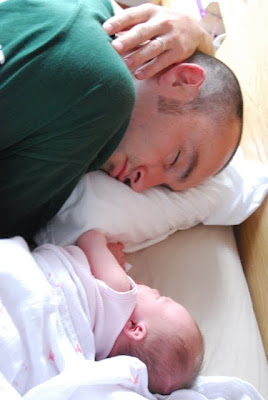 This is a real can of worms I'm about to open. I can tell.

I like sleeping with my children in principle. But in practice? Not so much.

From the outset, I am not one of those mothers who co-sleeps with their baby. I get the philosophy behind it and all that, but I find it hard enough to sleep in the same room as a newborn, let alone in the same bed as one.

The few times I have brought my newborn into bed with me (normally after the third night feed when eyeballs are two metres below my eyes) I have not slept due to paranoia about smothering them. If I do manage to fall asleep, I am jolted awake by my husband shrieking with paranoia; he's just had a nightmare we smothered them. Or I awaken (not even having realised I've been asleep) madly flapping about me and freaking out - I.cant.find.the.baby.anywhere!! My husband - woken by my screeching reminds me that baby is sleeping peacefully in his bassinet beside the bed. This has happened more times than I care to remember!

Nope, not a fan of sleeping with newborns.

They're sleeping in their own room now. And doing great... most of the time. Except when they're growing a tooth. Or have an earache. Or havn't done a poo for four days.

You've tried patting. And cuddles. And rocking. And a breastfeed. Another breastfeed. Pacing up the hallway. Baby has gone from moaning to a full on all out screaming attack. You are at a complete loss.

And so you find yourself carrying baby back to bed with you.

In theory, both baby and you would snuggle up together and fall blissfully asleep til morning. And sometimes it works that way.

But in my experience, it doesn't often happen that way. I only bring dear Elliott into bed with me in dire circumstances. One such occasion was a few nights ago; the inspiration behind this post. He had been inconsolable. Two awful hours of battling with him to go to sleep to no avail and I found myself tucking him in next to me, praying he'd snuggle up and go to sleep.

Babies, for the small creatures that they are remarkably consume a lot of bed space. They have moving limbs that can thwack you in the face (Fern once nose-butted me with such force it made me cry!). They tend to think it is a bit of a game to be in bed with mum and dad and it is not unlike my previously screaming baby to now be climbing up over my sleep deprived body squawking in delight. Lie down? I don't think so. Why would they when they can sit up; roll over; climb the bedhead; thump their legs; crawl over their parents........

At 2am, when your own child is the only reason you are being deprived of sleep, it can be tough to remain calm. It takes a lot for me to get angry at my kids, but I'll be honest and say my husband and I are less than gracious to one another at that hour.

After about an hour of battling in my own bed with Elliott, I eventually carried him back to his own bed where he promptly fell asleep til morning.

It's often been the same with Fern. She likes being in bed with us, but she has no intention of sleeping while she's there. When - in desperation (ours) - she's come into our bed, its normally only for an hour or so before we carry her back to her own bed and she happily goes off to sleep.

Do you sleep with your kids? Do your kids like the idea of being in your bed more than actually partaking in any sleeping with you? What say you on this topic?

ps. Just because I don't like the kids in my bed doesn't mean I don't on the odd occassion climb into theirs! Here's a little look at a bit of fun we had last weekend; little Elliott had a smile 4 metres wide at his sister and dad being in the cot with him.... but when I climbed in he only had eyes for Fern. He adores his sister, he does. x 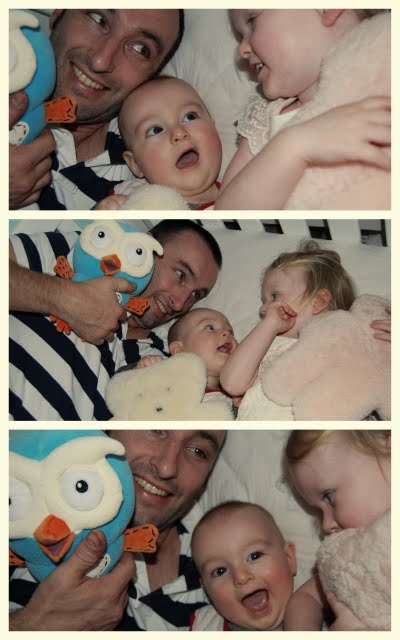