Elliott's Birthday - the Theme has been Picked!

Ok, I know lil Elliott will not turn the big 'one' until August but... I can't stop myself from starting to think about his birthday shindig! It goes without saying that I want it to be special. He's my one and only little boy and you only turn one ONCE! Not to mention, Fern well and truly understands the concept of birthdays now, and it will be just as much about creating a special day for her to enjoy as much as Elli who (lets face it) will have no idea what is going on!

I've to-ed and fro-ed about possible themes... first, it was going to be a 'vintage tricycle' theme. But - well - Elliott can't walk yet, let alone ride! So that theme will have to wait a year or so... then, I considered a Peter Rabbit theme. But in truth that would be more up Fern's alley. She loves her Peter Rabbit so I'l be holding onto that idea for her!

I thought a lot about what Elliott likes. But at 9 months, its sorta hard to tell! He's a boy who's favorite past times include eating paper, climbing up my sidetable to pull down the glass lamp, clutching onto his sister's hair and tearing through the house on all fours. He doesn't watch tv. He isn't even all that interested in toys. He does love his food but...none of this is giving me inspiration for an awesome party theme!

Then it hit me. He does have one thing in his life that is consistent. One thing that he wants with him each and every time he goes into his bed for a nigh nigh. The one thing he can cuddle that is comforting and soft and warm and will be there into his childhood.

My son is rough and tumble. A human four-wheel-drive. Messy. Tough and nails.

And he loves his teddy bear.

And so. The decision made itself, really! 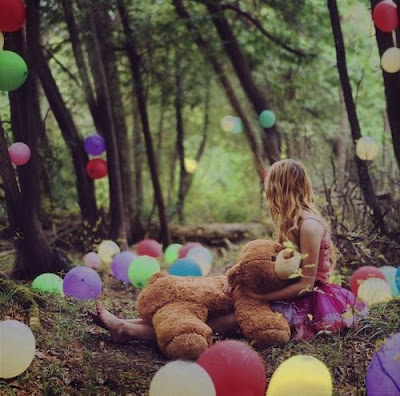 For sonny's first birthday, I'm throwing him a Teddy Bear's Picnic!
I've no idea how I'm gonna do it. Im open to your suggestions -- how can I make it as super special as my super special little Elliott??
Have a lovely week....