Exciting News - An addition to our family!

Well folks, I can finally announce that we Clearys have expanded our family-population and are now eating for FIVE! Well, six if you count the Labrador... 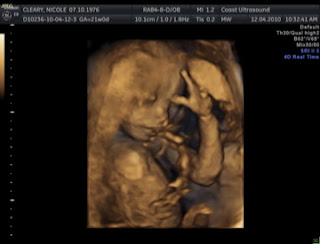 KIDDING!!!
Are you serious? No way! That image is little Elliott in utero at about 20wks and a picture is about as close to a new baby as I wanna get at the mo! The cute thing is that now I can look at it and see a definite resemblance to the little boy he is today!
Anyway. We DO have a new member of our family, but not the baby kind...
Meet Sally! 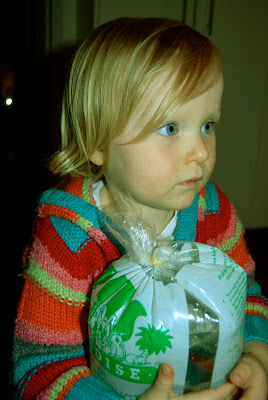 Dan decided to drop me off at the gym one afternoon and get some sushi with the kids, then pick me back up afterward.
When I walked out an hour later, I was greeted by my family -- all beaming from ear to ear. I was immediately suspicious. Fern was clutching onto a plastic bag filled with water and held it up for me to see like it was a pot of gold... and it was gold... of sorts. Yes, a goldfish had been chosen to come home with us.
It already had a name.
Sally.
I was a teeny bit cross, I'll admit. I kinda thought anything that breathed should be signed off by ALL adult members before being brought into our home... I have enough to do with two little kids and a stinky-rador and saw myself being the one scrubbing mouldy fish tanks and remembering to feed and change its water... but I realised it could have been worse.
It could have been a rabbit.
Or a guinea pig.
Or -- horror and shudder -- a mouse.
So, Sally came home and was deposited into her new plastic tank along with some rocks and some tedpid tap water (geez Dan, you coulda at least bought a nice glass bowl!). Fern and Elliott stood at the little table and peered in at her. She peered back.
And Sally was thus inducted into the family.
So now we have a goldfish.
hmmph.
Have a lovely loooong weekend, fellow Aussies! 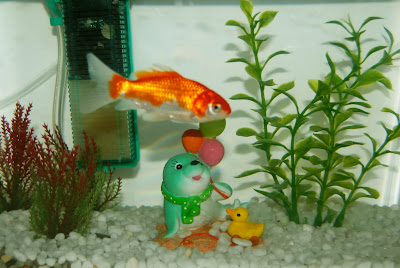 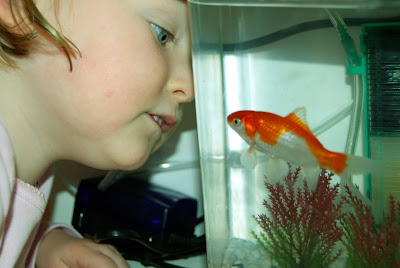 Posted by Bubby Makes Three at 9:18 AM