My husband lives and breathes cycling. He owns two bicycle stores here on the Central Coast so he works with bikes all day. When he comes home, he watches all the cycling he's recorded on Foxtel and more often than not then goes off riding or racing his own bike in the evening. He talks cycling. He reads about cycling. When he's not actually cycling, he's thinking about cycling.

I like cycling too. Just not as much. I used to a bit more, and maybe I will one day again, but these days I prefer 'cycling' in the confines of a hot, sweaty, dark room fitted out with glow in the dark paint. aka the Spin room at the gym. I don't have as much time on my hands for outdoor pursuits these days. Or rather, I don't make the time. Let's not make excuses.

But yesterday, I made an exception.

Dan is not one to let the fact that we have a two year-old plus a small baby only recently able to sit on his own get in the way of a family cycling adventure. That's why he came home with this: 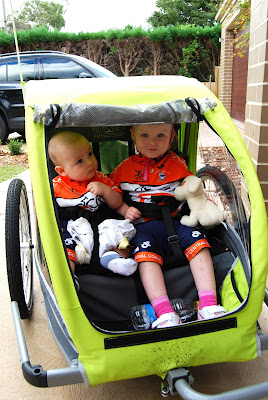 It's a trailer that connects onto the back of a bike. This one comfortably seats both our children, side by side. Fern and Elli absolutely love sitting in there watching the world go by (well, Fern watches the world, Elli just watches Fern!) ... they talk to one another and shout out orders to daddy to go faster. And this thing literally stops traffic. We get thumbs up from motorists and I've seen a few drivers almost break necks swivelling their heads around 360 degrees to get a geezer of the guy in professional riding getup sporting his two little kids on the back of a trailer... And as I ride my own bike behind Dan and the trailer, what absolutely melts my heart is the sight of Fern's arm, wrapped around Elliott's shoulders holding him upright.

We can't wait til Fern and Elliott can ride a 'real' bike and we can all go out together... Fern has been sitting on the back of Dan's bike since she was six months old and barely big enough to keep a helmet on her head! It's becoming a bit of a Sunday afternoon tradition to get out there and feel the wind in our hair... a tradition that can only get better as the kids get older and are eventually able to pedal their OWN bikes, most probably faster than we can!

Yes, I'm dreaming of a time we can all meander romantically along the waterfront on a sunny day with baskets laden with picnic food... but  I can't help but think Dan might be harbouring a slightly more ambitious dream for his children: Yes folks, Dan has brought home the complete Central Coast Cycling Club kit consisting of jerseys and knicks for both our children, including one who cannot yet walk. Yep. But apparently he can ride?!? Proud daddy, much? And between you and I, it was kind of cute.... 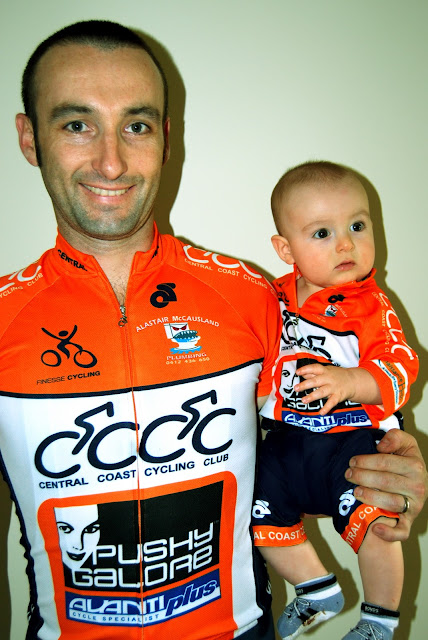 To my little cycle-super-stars of the future -- hurrah!