Would YOU Take a One-Year-Old to a Wedding?

We travelled to Canberra for a wedding over the weekend... 4.5 hours in the car with a 12 month-old baby = fun times! My parents came down with us to babysit Fern throughout the reception which was nice, but we decided to take her along with us to the church ceremony. I had my 'bag of tricks' and thought she might just sit contentedly on our laps. Ha!

The extreme heat over the weekend meant that even inside the big stone church it was a good 30+ degrees, and we were broiling from the moment we all squeezed into the pew. Fern did sit on her dad's lap... for about 12 seconds while she munched on some sultanas, then proceeded to squirm from his lap onto the floor and then crawled into the isle where she threw sultanas around like rice confetti and then ate them off the floor. V glamorous, my daughter.
Once she grew bored of flinging sultanas, my daughter discovered the flowers tied to the end of the pews and I spent most of the remainder of the service prying orchid stems from between her sticky fingers...
Fern's latest trick (and we have no idea where this has come from) is this sort of fake, chipmunk giggle which, once she gets started, she can continue for hours at a time. The wedding was apparently hilarious to my daughter, who laughed like a hyena, causing people to turn around and no doubt wonder what type of marsupial had escaped from a zoo into the church. By this stage I was hiding in another pew with my head hidden; so I could only shake my head in bemusement.
Yes; it's interesting times with a baby/ almost toddler.... but I wouldn't have it any other way. 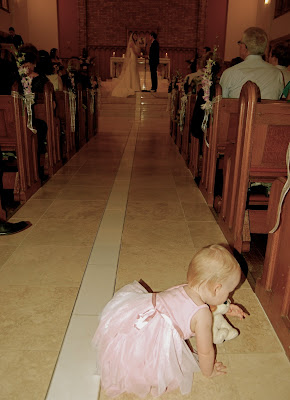 Have a great week!
Posted by Bubby Makes Three at 7:37 AM