Last school holidays, we took Fern to the aquarium at Darling Harbour in Sydney. Except, novice parents that we are, we somehow didn't realise it was school hols until we got there. And saw the line snaking from the aquarium to - I dunno - Western Australia or thereabouts. Shite.

But we had our hearts set on seeing the little fishies (and sharks! There will be great big sharks!) and so took our place at the end of the line with a great big sigh of resignation. Then, Dan noticed that there was one line with nobody in it. That would be the xpress line for season ticket holders... yes folks, for the lowly sum of a couple of hundy we could visit the fishies AND Wildlife Park AND Sydney Tower AND Manly aquarium as often as we liked for a whole year!! So of course, quicker than I could protest "but hey, we live a billion miles away and we're about to have a baby and will we really ever come back?!?" Dan was getting his photo taken for the ID and jauntily making his way through the turnstile.

Of course, that was a couple of months back and we hadn't returned since. But on Sunday morning we woke up and spontaneously decided to go to Wildlife World with the two kids. We called for reinforcement -- nanny and poppy agreed to come along and meet us at Artarmon to catch the train into the city. On the drive down to Sydney, Elliott had a minor meltdown and we stopped to give him a quick feed. Of course, the resulting blowout ruined his gorgeous outfit (and mine!) and he spent the rest of the day in his jammies - the only spare outfit I'd remembered to pack for him. But this was the only hiccup... the entire day!

Honestly, carting one 21-month old and a newborn baby down to Sydney for the day should have been a recipe for disaster; but the kids were absolutely faultless the entire day and little Elliott slept from woe to go! He slept on the train; he slept through Wildlife World and he slept through the restaurant at lunchtime! I had to wake him for a feed, and he then went straight back to sleep and stayed asleep until we were back in the car on the way home! I made it look way too easy!

Fern loves animals and was totally entranced by every creature she encountered at the wildlife park. She, and therefore we, had a complete ball. And I think nanny and poppy did, too! If you haven't been down to the Wildlife World, I totally recommend! Just not during school holidays...

Hope you too had a nice weekend; what did you get up to? 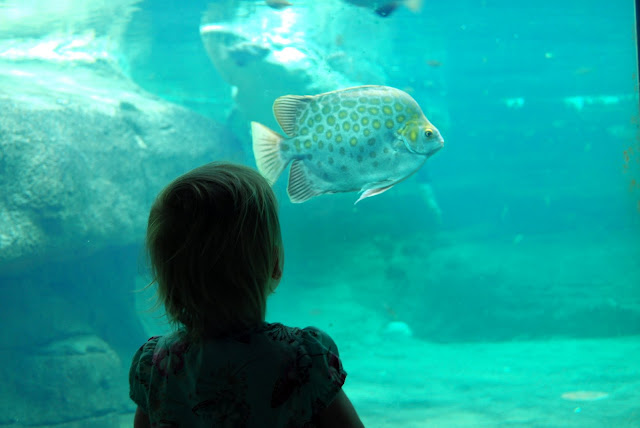 Posted by Bubby Makes Three at 6:30 AM