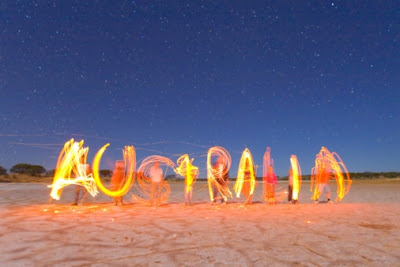 We were having a really lovely Australia Day. Dan got up super early and did a lazy 60km's on his bike before breakfast (as you do) and even I made it to the gym for a Spin class. Sated, I was feeling great as we packed the picnic basket and  made our way to a friend's rural property for a lazy bbq lunch and swim in the pool.

The day slipped away and poor Elli was seriously overdue for a sleep (he wasn't too excited about being locked away in the porta-cot set up in our friend's living room) so we decided to drive home in a leisurely fashion. Turning whimsically up this laneway and that, we dreamed of buying our own rural property some day. You know, when we become millionaires.

A few kilometres from home a guy on a dirtbike pulled out in front of us, narrowly missing both us and a couple of girls walking on the pathway adjacent to the road. No helmet. No license plates. He darted across the wrong side of the road and disappeared up a sidestreet, cloud of smoke billowing behind him.

We were wondering where the police were when suddenly we saw one! We kept driving, hoping the guy would be caught when suddenly the sirens were behind us and we were being herded into the median strip! We weren't speeding, so we thought it must just be a random breath test.

A policeman sidled up to the drivers door and peered in. Dan and I were in the front wrapped in towels, the kids were in the back wearing nothing but nappies (it was 35 degrees!) and we were listening to 'Old McDonald Had a Farm' on the CD player.

We were being video camera'd, the policeman said. Anything we said would be recorded and could be used against us. Had we been drinking? "Um, no". Was our car registered? "Yes, of course!" The policeman smirked and went around to the sticker on the windscreen. I squinted through the backside of the sticker and read the date.

Well, he could...... if only it were in the car, and not in Dan's wallet somewhere at home. Could this scenario get any worse?

The policeman disappeared back to his car for about 3 hours. Dan and I silently panicked, wondering how we were going to get home and what was going to happen to us. Elliott was sound asleep, and Fern was blissfully oblivious, singing along to "8 green bottles" in the back.

The policeman came back. His tone was slightly more pleasant, clearly he'd done all the checks and concluded we were only mild vagrants; our car is only 2 years old and doesn't need a greenslip inspection and both Dan and my driving (and criminal!) records are pretty impeccable. In a slightly apologetic tone, he explained he shouldn't let us drive home but was going to turn a blind eye, that he could charge us $1500 but out of the goodness of his heart was just slapping us with a $550 fine for the unregistered vehicle.

In fairness, he was right. The vehicle WAS unregistered. By 8 days. In an honest and legitimate mistake, on my part. I'd seen the insurance paperwork which said January 30, and I stupidly thought that was the rego date, too. Clearly not. I explained this to him, but I might as well have been talking in Arabic.

And so, the Police Department will be almost $600 richer because of the obvious threat to Australian society that Dan and Nicole were driving a car 8 days out of rego. And the guy that almost swiped 2 pedestrians off the pathway on his dirt bike was by now miles away...

Does this seem fair and right to you? It seems sort of poignant to me that this incident occurred on Australia Day. That this policeman was being paid double-time-and-a-half of tax payers money to literally drive around looking for revenue-generating crimes to convict people with. Yes, we were breaking the law. But were we a threat to society? Maiming anyone or anything? Was the half hour this policeman spent berating us the very best use of our law enforcement's time while there is so much violence and crime going on around us??

I'd love your thoughts on this...

Posted by Bubby Makes Three at 8:30 AM