My Big Little Treat to Myself!

On Sunday, I awoke feeling... well... a little less than 'fresh', shall we say. I think I may have had a small bout of food poisoning from some Thai the night before. It was bucketing down with rain, Dan had the day off work and really I had all the excuses in the world to just lie in bed for once and do. nothing.

But I didn't, of course. I'm not capable of that. So I dragged myself out of bed, decided eating was an activity that should best be delayed for the next 24 hours and decided to go shopping!

I had a $100 David Jones voucher that had been mocking me from it's magnetised clip on the fridge for the better part of a month. A world record, by my usual standards! And this time, this time I was determined to buy something for myself with it, rather than clothes for the kids, which is 99% what I do with gift vouchers these days...

Feeling a litte worse for wear, I was only at the shops for under an hour, but after circumnavigating DJ's a few times, I kept coming back to the one item I've coveted for a long time and that I've gazed at longingly every time I go to DJ's. Something extravagant. Something decadent. Something I didn't need. But something I'll look at every day and one day pass down to Fern. It's this: 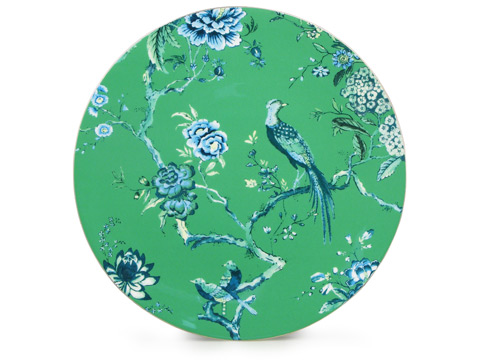 It's the Jasper Conran Chinoiserie Green platter by Wedgewood. I didn't have quite enough money on my gift card, and had to fork over an extra $50. But I think its worth it. And I'm really glad I bought something for me. Which is probably why I then hit the kids section and bought clothes for the kids! teehee.

How often do you treat yourself to something you love?

Hope you have a great week... x