I - Nicole Cleary - get intimidated when I go into haberdashery stores. 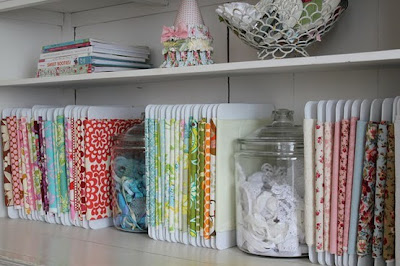 Yesterday was no exception. As I stepped into a new store that has opened up near me - one with some lovely unique fabrics and essential bits and pieces - I slid a sideways glance at the elderly saleswomen, merchandising the accessory wall to which I was headed. I've been into this store a few times, and normally nobody pays me any attention. No 'hi, how are you', no 'can I help you's'... nothing.

But today the store was empty. And I was standing right in front of where the women were working. Really, they had no choice but to acknowledge my existence. They asked if I needed any help.

And I was forced to admit that I did. I explained I'd snapped a sewing machine needle 'again' and needed some new ones. The women clucked in disapproval. 'That should never happen', they said. It should only be happening if I'm not sewing right. Or I didn't know how to use my machine. Or I wasn't changing the needle enough to begin with. One of the ladies suggested I attend sewing classes.

I responded with my interest in attending a class, but explained I had two small children and that committing to such a thing throughout the day time was pretty difficult. 'You wouldn't want my children in the store', I joked, to which the saleswomen replied "no, I certainly wouldn't!" without a hint of a joke in the tone of her voice.

This is not an isolated incident. Walking into fabric stores always has me feeling akin to Julia Roberts in Pretty Women (but without the 'shit hot Lotus'). I nervously wander about; examining new fabrics and colours and patterns but rarely am I ever spoken to by a sales assistant unless I am at the counter purchasing something. My questions are often received with barely disguised disdain and a mild sense of distrust, as though I am going to be using the 10 metres of elastic I have just asked for for sinister purposes. When I asked for such a thing yesterday the lady asked me straight out what it was for before she started cutting, in the tone of voice that insinuated once I told her I was going to realise I needed 10cm instead of metres.

In case you don't know, I run a surprisingly successful business these days - one that requires hours and hours of sewing every week. I am no stranger to my machine, and though I don't profess to know it all, I certainly know my way around a rotary cutter.

But it shouldn't matter, should it? Whether I have 10 years or 10 minutes experience, shouldn't I be treated the same?

Why then, do I feel like there's such unabashed snobbery in these haberdashery stores?

Am I exaggerating? What has your experience been in these stores?? Do share...