It's the weekend... you've been invited to a good friend's child's 2nd birthday party. It's in a smallish apartment, and you really don't know anyone else there apart from the host. There are other small children there too, of course. They are playing happily with the little plastic trikes and toys and their parents mingle comfortably with wine glasses in hand.

Your 18 month old son barrels into the scene and within minutes has tipped a bowl of crisps over the carpet, had a screaming temper fit on the floor and scratched a large gash in the face of a little toddler girl you have never before met because she was playing in the little car he decides he wants for himself. 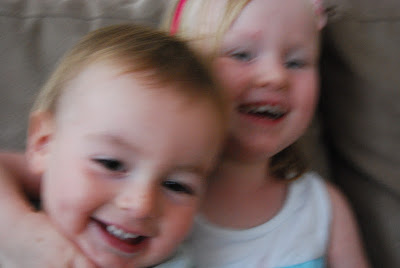 (a) Shout and scream at your toddler;
(b) Smack his bottom;
(c) Apologise profusely to host and parents and carry screaming toddler out of apartment for time out, or
(d) Do nothing?

I took the (c) option but it felt hollow. How do you explain to someone you have never met that your child really is a beautiful little boy with no intentional malice when they have just scratched a chunk out of their precious little girl's face?

The mother didn't say a word as I attempted an apology, just gave me a half glance and requested Detol from the host and my friend to attempt to repair the damage. Detol, like my child has rabies.

But I couldn't judge her. I know would have done the same. I would have been horrified if the shoe were on the other foot. And, before Elliott, when it was just Fern (who at three has never scratched anyone in her life), I would have cast immediate judgement at the parents of such a child for 'allowing' such inappropriate behaviour.

But now I am the parent of such a child. And I was mortified. Embarrassed. Horrified, actually. And, as a room full of people watched with interest to see my reaction to this spectacle I wanted to crawl into a hole and quite literally die.

Folks, I did not raise my children to be violent. I hate violence. I can't even watch a movie with any violence in it without leaving the room. I do believe in discipline, but I am at a loss for how to discipline an 18 month old child, and teach him that this behaviour is not appropriate. Elliott is an energetic, vivacious, otherwise adorable and loveable little person who - in social situations - does not understand the difference between right and wrong.

Any advice you can offer will be gratefully accepted; what do YOU do when your child behaves inappropriately in public? What do you do when your child smacks another child? And how do you deter such behaviour in the first instance? Please tell me I am not the only one who has had this experience and that it is not my dreadful parenting that has made my child this way?! xx

Posted by Bubby Makes Three at 8:45 AM