How do you feel about 'dummies'? I'll bet you have some sort of opinion... everyone seems to, whether they have children or not.

Me? Before I even had Fern I was dead against them. At the risk of offending my readers, I was terribly holier-than-thou on the subject and my pet hate was seeing toddler-aged children wander through shopping centers with a dummy 'plugged' into their mouths. I thought it looked awful, like they were being 'shut up' by their parents...

After Fern was born, I resisted a dummy for a couple of months. Out of principle, more than anything else. Then, Dan (bravely) brought one home one day and offered it to Fern to help her sleep. She wasn't that fussed about it, and sucked on it thoughtfully for a little while before spitting it out. But over the next couple of weeks she grew more attached to it, until I grew nervous that the 'dummy addiction' had set in. We only offered it to her at sleep time, but still. Could she go to sleep without it?? Could I go to sleep, knowing she didn't have it??

Then, something awful happened. The dummy got a hole in it, and had to be thrown away. I panicked, and went to buy another. But I couldn't find the same one, and bought another brand in its place. Fern was more discerning than that (geez, wonder who she takes after) and refused to take it. Thus ending our short but torrid affair with the dummy.

Well over 12 months passed until one day, about 6 weeks ago, Fern discovered the wayward dummy in the kitchen pantry along with other discarded bits of bottles/ beakers etc. She popped it into her mouth (upside down) but soon discovered she quite liked the sensation. Since then, she's developed a quick and somewhat passionate affair with this dummy and is extremely reluctant to be parted from it. She likes to sleep with it, but it has also found its way out of the bedroom and into the car... her 'cubby house'... out in the garden...

How did I let this happen?
Fern is 'too old' for dummies at 17 months, surely.... and yet seems remarkably placated by hers, especially at bedtime. It makes her content. Comforted. And I am therefore content and comforted, too! But there has to be an expiry date, and sooner rather than later.
Or does there? 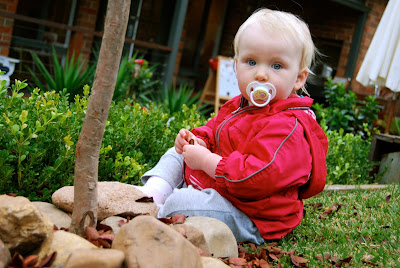 Would you dare remove the dummy from this child?
I'd love your opinion on this one.....
Posted by Bubby Makes Three at 6:30 AM