A Bit About Boobies...

The awe-inspiring beauty of nature never fails to amaze me. Really.

The fact that a woman can create and carry a human being for 10 months and then give birth to it is nothing short of miraculous to me!

But this story is about another facet of nature at its most beautiful... one at the epicentre of my universe just at this moment... yes folks, I'm talking about breastfeeding!

Before I start, you should be assured that I am not one of those holier-than thou types who preach breastfeeding like a religion and frown upon any women who doesn't partake. Far from it. Breastfeeding is an entirely personal decision and I would never, ever judge someone else for choosing otherwise, especially when I don't have any understanding about the factors that have influenced their decision.

And here's the thing.

Before I had Fern, I was a little bit - well - grossed out by the idea of breastfeeding. Really. I mean, I forced myself to be open to the idea (I ambitiously went out and bought maternity bras!), but if I'm honest I'm a bit of a prude, and the idea of having to get my boobs out and have something feed from them - privately or otherwise - filled me with horror.

Then I had Fern. And at some point it occurred to me that I should feed her (after my caesarian, no one thought to explain feeding to me, and I was in too much of a drug/ shock induced stupor to ask). I had no idea what I was doing, and almost asphyxiated my poor daughter on her first feed. She had turned blue before I even noticed that her nose was crushed against me -- she never did let go of the boob, though! 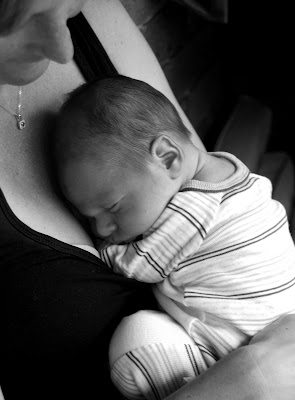 The day my milk 'came in' was an experience I was ill prepared for - every hormone I'd ever had barrelled into me all at once, and that indescribable, terrible fullness took me by complete surprise. I was in agony for days before one of the nurses kindly suggested I consider wearing a maternity bra... it had not occurred to me up until that point! I had never in my life HAD to wear a supportive bra and I had dreadful nipple cripple for weeks as a result.

But I am blessed to have had babies that latch with ease, and boobs that produce copious amounts of milk. Almost too much milk, actually. In the months following Fern's birth, when she finally started sleeping for more than an hour at a time through the night, my husband would find me hunched painfully over the breast pump at 4am in a vain attempt at deflating the milk-bar monstrosities protruding from my chest. Just you try sleeping on your tummy with a couple of leaky rock melons down your bra!

Nobody can dispute the challenges of breastfeeding -- leaky boobs, latching issues, milk production, clogged ducts (lets not even talk about Mastitis!), saggy daggy maternity bras, stretched and milk vomity clothing and getting your boobs out in public... but it gets easier. And one day, you become aware that you are sitting in a crowded cafe with your top pulled up; baby nestled in one arm sucking heartily away, with a fork in your other hand spearing lettuce leaves (your diet after putting on 300kg's during your pregnancy) and when the baby pulls suddenly away and your nipple is on public display... you don't even care.

I think this is the most beautiful thing of all about breastfeeding. That it is so primitively natural. And there is something primal about the nurturing, indescribable feeling a mother gets as she feeds, nourishes, sustains the life of her baby purely by the supply of her own milk. And the look in your baby's eye as he gazes up at you from the breast, one of utter satisfaction - hell, gratefulness - that makes every perceivable negative worthwhile.

So, as I sit here tapping away with one hand, the other supporting little Elliott's head while he suckles contentedly from my lap, I feel an inane sense of motherly completeness. Like this is what I was born to do. Don't worry, the feeling won't last. I'll be back to my normal deranged self in no time. I've recorded this precious moment while it lasts!

I'd love to know your thoughts/ experiences with breastfeeding... have a great week x
Posted by Bubby Makes Three at 6:30 AM