You might recall my little e-tour of Elliott's nursery a while back... back when 'he' was still an 'it' and I was decorating without knowing quite who I was decorating for! Well, Elliott has well and truly arrived and assimilated happily into his new room, but I've had a little guilt for having not had the time to touch it since he came home! It isn't that it looked awful, but I wanted to put a little 'Elliott' stamp on it for him!

What you didn't see in my original tour of the nursery is this wall: 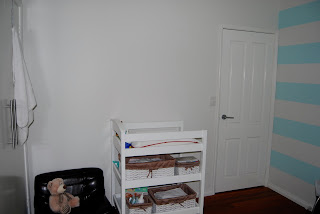 I ran out of time (and energy) before the baby was born, but seeing as my feeding chair sits directly opposite this side of the room I've been staring at this blank canvas for weeks, depressed at such a sorry spectacle! Over the weekend, I decided to take action!
Tying in with my existing stripey wall, I decided to paint just one feature stripe on the wall in the same colour. That took about 45 minutes. Right, I figure I have about 45 remaining minutes before both kids are up from their naps and screeching for my attention... So, how to decorate? I don't have time to go shopping, so I have to be creative with what I already have about the house.
I remembered some 'train' wall stickers I'd bought previously from the Reject Shop (I'm such a cheapo store connoisseur now!) for a bargain $5 and stuck one of those down: 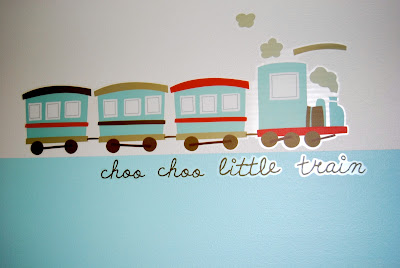 I like! But it doesn't seem enough... I then grab some frames I've got lying about and whack Elliott's birth announcement in one until I have time to buy a print off Etsy. I find another one I made previously using Dulux paint swatches and add that too. Then, I find another frame and, without any art to place inside it I remove the glass and blutac some magnetic letters inside: 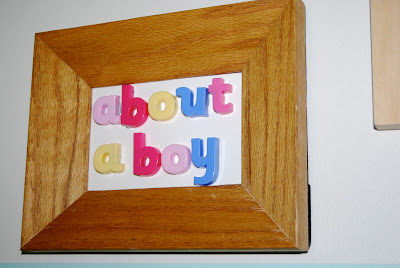 It didn't look symmetric, so I added a little card with some pegs... and here is my finished product! I plan to change my 'mobile art' around as the fancy strikes me (which knowing me, may well be weekly) and am already planning to add a little square canvas covered in patterned paper. But I much prefer this than my blank wall! 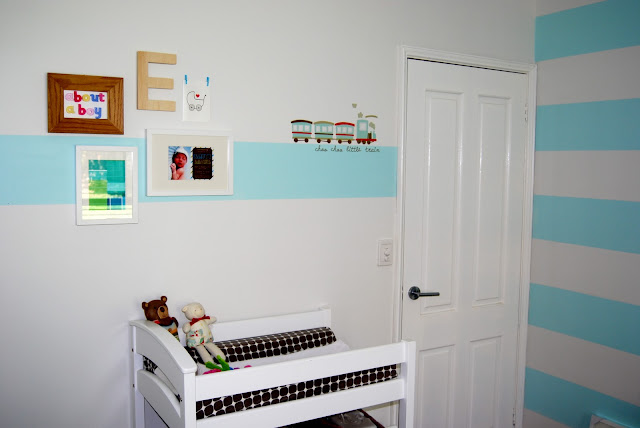 Have a great week!
Posted by Bubby Makes Three at 1:56 PM