In Which I Sew a Kids TeePee!

Hello folks! Way way waaaaay too long ago, I made reference on my blog to making my own teepee. Back then -- I'd only ever seen them in the shops for about $250 each and when I found a how-to in one my favy kid decorating books, Cool Spaces for Kids, I knew I must one day attempt one myself. I set myself an end-of-year deadline.

End of LAST year, that is. Truth is, I was more than a little intimidated. And so I put it off. And off. And off. My deadline came and went and I was no closer to dedicating myself to the task.

Until suddenly there were teepees and teepee-making instructionals making funny faces at me everywhere. And I decided enough was enough.

I made my way to the fabric store and purchased about 200 metres (ok, slight exaggeration) of calico for the body of the teepee. You can use whatever funky fabric you like for this project of course, but I wanted calico because it was plain and therefore ripe for decorating, plus it was inexpensive and perfect for manouvering about outdoors. Oh -- and if I stuffed up, it would be cheap enough to start again! (such confidence in my own ability ;)

I engaged Dan-the-bike-man (husband and part-time bm3 pattern cutting assistant) to cut out the pieces and really it is pretty much as easy as tacking it all together and whipping it up on your trusty sewing machine! Granted, you need about 10 rolls of cotton (ok, another slight exaggeration) to get through the sewing part. And there is an awful lot of hemming and so on. But really -- a beginner sewer could do it; PROMISE!!

The fun was in the decorating, of course!

I kept mine pretty simple; I chose a fabric colour palette of red, white and navy blue and contrasting patterns. Although my teepee is for both my kiddies, I really made it for little Elliott -- for his birthday party (which was on the weekend and which will need its own seperate post once I get the pictures; sooooo much to share!) and later for his bedroom, to read or frolick about in or to hide from his sister).

I made a simple string of bunting, cut out a little window, sewed some triangles along the bottom, some trim along the entrance and ta-daaaaaaa: 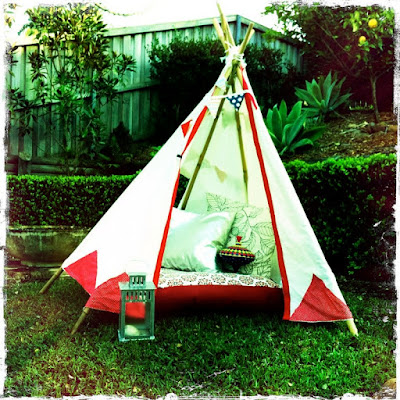 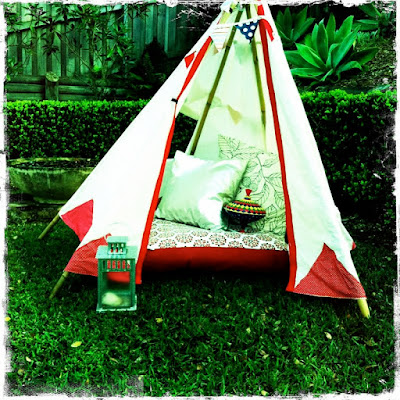 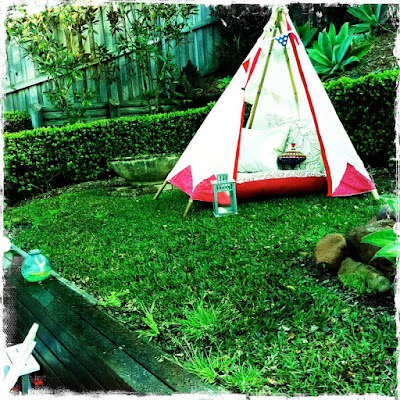 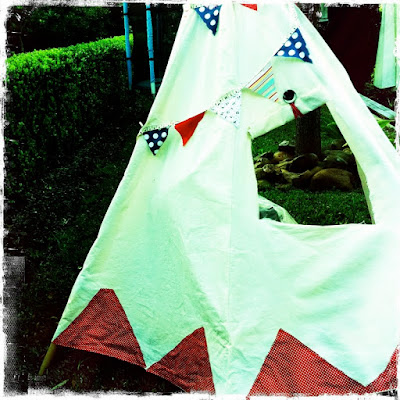 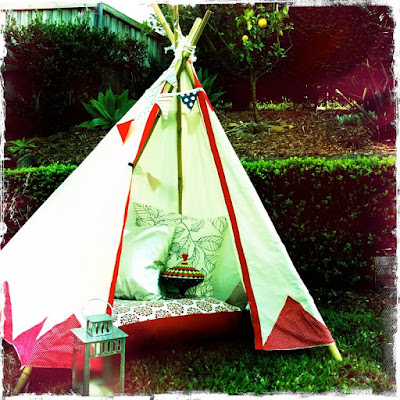 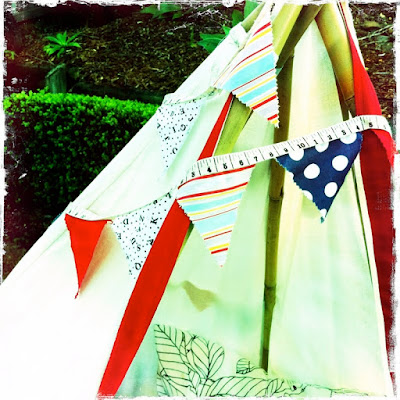 The hardest part I reckon was getting all those damn bamboo sticks in the right way -- took us FOREVER! We decided to sew little loops to keep our teepee attached to the bamboo and there is also string tying the whole thing together at the top.

It took a little while to pull together but I reckon it was worth all the effort and was a hit at Elliott's party!

I'm going to set it up in Elliott's bedroom once I ditch the feeding chair with some comfy cushions and books and whatnot. His own little indoor cubby-house!

Posted by Bubby Makes Three at 8:40 AM