I love Mother's Day - soggy toast in bed; hastily wrapped gifts; perhaps a painted card brought home from kindy... my one day to be totally indulged for being the world's greatest mum. In my children's eyes, anyway.

So it's totally fitting that my husband should embrace Fathers Day with similar enthusiasm. Pancakes in bed? No problem. A little pressie? Of course. Permission to lie under a blankie on the couch and let me flap about with the kids? Hmph, I guess so.

But my husband didn't want any of that. Well, aside from the lying on the couch part.

No, my husband wanted me to race a road cycle time trial. For 25km's. You know - like they do in the Tour de France. A race against myself. And the clock.

I tried to decline.

I wasn't keen, to put it mildly.

But yet, I found myself this morning at 8am on the start-ramp - a stranger supporting the back of my seat as I hovered awkwardly on my pedals, trying desperately not to throw up. I succeeded. Just. 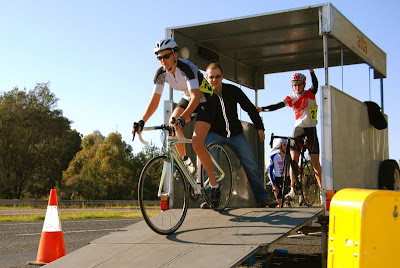 There were a surprising amount of other women there, and I wasn't half intimidated as I eyed their flash machinery and olympic-athletesque-bodies. What was I doing? I was about to be disgraced!

The first 6 km's were an adrenaline-fueled blur as I fought to control the nerves and concentrate on the task. The gravel on the road was loose; it was windy and at times I felt like I was getting nowhere. There is something surreal about racing against yourself and having to mentally focus your energy without anyone else around. I didn't have a trip computer so I had no idea how far I'd gone -- but my husband had the car and stopped intermittently along the course to tell me where I was at. The second 6 km's were fairly hilly and although I had shaken the nerves by then, I was feeling pretty tired and fighting the inclination to stop at the turnaround point and call it a day. I didn't, of course, and ignored my screaming legs to complete the remaining 12 km's. I crossed the finish line with nothing in me left to spare... I'd done it! 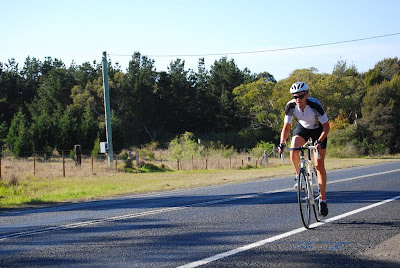 And I wasn't even 'disgraced' -- my time was well up there with the other women and I was actually competitive!

My husband wanted me to do it because he thought I could.

And it turned out I could, folks! I could!

And that's how Dan got his Father's Day gift.

Here's a little pic of Elli-Boo and Dan on Fathers Day - post ride, "sharing a beer" :) 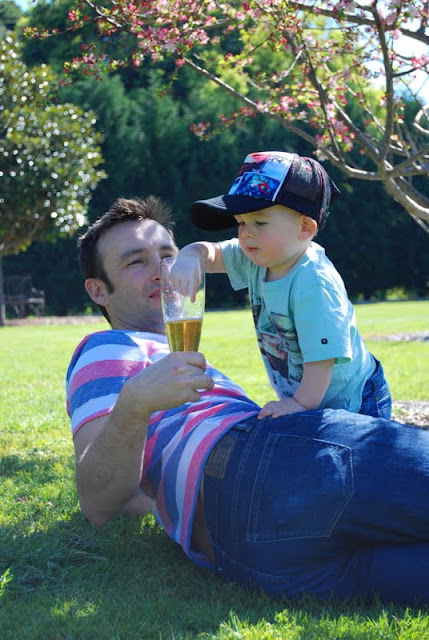 What did you get up to on Father's Day?? Was it lovely?